Blake Elizabeth Lewis: I am here with Miss Bobbi Jean Olson and Ezra Estes the director at the fashion design program at Santa Fe Community College. What is your inspiration for your designs, and how did you get involved in Santa Fe Fashion Week?

Ezra Estes: My inspirations come from several different places. I take cues frequently from nature, you will see them in some of my clothing, sea shells, waves and such. I've also been a horseman for many many years so much of my designs have come from an equestrian theme.

Bobbi Jeen Olson: You have several of your students on the runway.

Ezra Estes: That is correct I have Destini Duran is a featured designer, she put up 20 looks I think.

Bobbi Jeen Olson: Yes she did.

Ezra Estes: That was all done in a matter of 60 days, so she has been working night and day to get that turned out, good for Destini.

Bobbi Jeen Olson: Yes she did a spectacular job as well, congratulations.

Blake Elizabeth Lewis: So you also have your own specialty store in downtown old Santa Fe, is that correct.

Ezra Estes: I do it is Seams Unusual since 1999 I think, so that's been a while.

Ezra Estes: Yes it is, popping the cork. and yes I've been a block west of the Plaza on Palace Avenue for about 14 or 15 years. You lose track after a while.

Bobbi Jeen Olson: So when you say specialty store, what do you specialize in?

Ezra Estes: Mostly one of a kinds. So I do custom suiting's, custom shirts, but the fashion designs are the preeminent modus operandi the studio now, I started as a tailor I slowly migrated into woman's wear, and of course woman's wear is a little more interesting then boys they get to wear colors other then tan, grey and black oh and what else do they have, oh navy how exciting.

Bobbi Jeen Olson: What can we look forward to on the runway this evening from Ezra.

Ezra Estes: The boys wear will be actually more non-traditional, so we are going to do a lot of sports wear. there is a 1960's inspired short swim trunk, and a gorgeous male model wearing it, so that will be fun. I did a little spin off of the Trayvon Martins case did a beach pant with draw string and patch pockets done in men's pin strip suiting's to comment are you a good guy or a bad guy, my guess is as good as yours, and your guess is as good as mine right. So that is part of it, then we get into the ladies, and obviously there will be a lot more color then the boys, and I've done a series, would you say armor for woman, so dresses that are patterned and very tailored. I think this day of age, where we've had crazy economic and waves of boiling water, woman want to feel very protected and secure in their clothing, and so you are going to see quit a bit of that in my clothing.

For more updated information and contact please visit us at santafefashionweek.com! Featuring Ezra Estes, 2013 Designer/Runway Director and the Fashion Director of the esteemed Design Program at Santa Fe Community College. 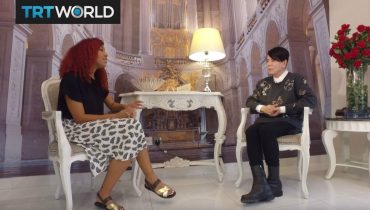